Jamaica: The Colonial Legacy
In the early 14th century there was a tremendous wave of change in Europe that prompted the emergence of a new kind of society; this change was termed as the enlightenment period. As a result of this, the system of feudal Lords was abolished and the concept of nation states and nationhood was gaining momentum. This change widely affected their way of life and their belief system.  The sailor tales of the ravages of the sea were replaced with the lure of wealth that could be accumulated through oceanic trade; desire to extend power by owning colonies as well the missionary zeal to convert non-Christians to Christianity and break the stronghold of Muslim Turks in the rich eastern trade.

Consequently, in the year 1492, a Spanish sailor named Christopher Columbus sought permission of  the Crown to finance an expedition for the New World.  After a lengthy persuasion and promises of amassing great fortune for the crown Columbus was finally granted permission to venture off into the ‘New World' to realize his goals for exploration.With three ships prepared and crew of formerly convicted felons, Columbus with a heart filled of aspirations ventured off for the NewWorld. 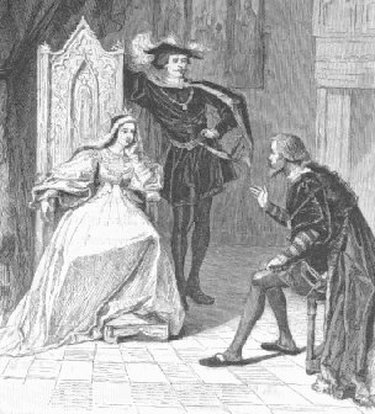 Christopher Columbus seeking permission from the King and Queen of Spain
Columbus’s initial intention was to get to the East Indies by traveling west and thereby proving his theory that the world was circular, he however landed in the Caribbean. The discovery of the island of Hispaniola in the Caribbean served as a form of encouragement for Columbus to explore and find more islands.   He then discovered the island of Cuba and it was there on that island that he learnt from the indigenous people of an island just south of them that was filled with gold and called 'Xamayca' now known as Jamaica. Although not known to him at the time, this was an attempt by the native population to get the colonizers away from their island.  However, with the hopes of great fortune in mind Columbus and his crew set sail for the island of Jamaica on the afternoon of May 3, 1494 and arrived on the island on the 5th. There he was greeted by the Tainos, who treated them as kings presenting them with peace offerings of cassava, fruit and fish not knowing that this initial interaction would be the advent of years of torture and mistreatment that would decimate their population so rapidly that would lead to their eventual demise. 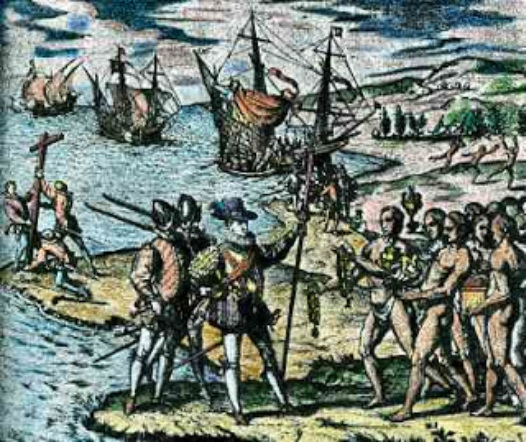 Columbus being greeted by the Tainos
The overriding ambition of the explorers was to accumulate a vast quantity of wealth at any cost, and then having fulfilled their dream, to return to Spain and live a life of luxury. However, the game of life isn't always as simple as it seems in fact their time in the New World wasn't a bed a roses. After a number of excavations it became clear that Jamaica had neither gold nor jewels to offer and this compounded the settler’s frustration. The Spanish, in response to their failures, decided to utilize the land to amass wealth using the indigenous people as forced labourers. By the encomienda system, Spanish settlers were awarded a number of the indigenous people who would work for them. In return, the colonists were responsible for teaching the natives Christian principles, paying them wages and looking after their wellbeing. However, this was not the reality, in effect the native population was subjugated to years of enslavement. The treatment of the Tainos were appalling, they were often overworked and underfed. The Spanish also came without women and as of such, often the Taino women were raped by the settlers. Many Tainos were also brutally murdered as sport which shows the extreme cruelty of the Spanish. In a brief account by Bartholomew de Las Casas in Destruction of the Indians written in 1539, he describes where Spanish settlers would compete to see if they could cut off a Taino’s head in one stroke. Settlers often hunted the Tainos with dogs and allowed their dogs to tear their victims apart. Many Tainos in response to this terror would a commit suicide and infanticide saving themselves and their children from the horrors that await them. It is of very little surprise that after a short time there was little to no Tainos left on the island. The most startling decline occurred in the earlier years of their conquest. The Spanish arrived in 1492 and with the short time span of 150 years not one Spaniard was left. This was indeed one of the most horrific incidents of complete genocide in world history. 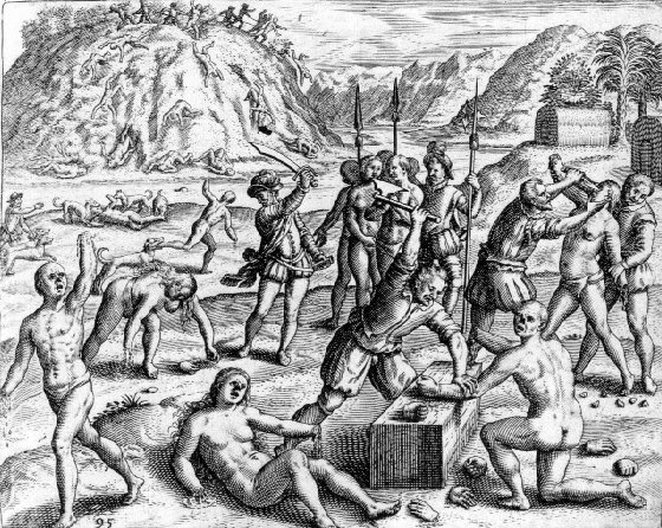 Drawing depicting the destruction of the Tainos by the Spanish, including attacks by dogs, as shown in the upper left hand corner of the drawing.(Source: G.A. Aarons 1983, p. 39)
With the genocide of the indigenous population and the absence of any gold or jewels on the island the Spanish rendered the island as useless. Consequently, the island was used a supply base and its strategic position also helped in the conquest of the more fruitful island of Cuba.